This retail simulator has you decide the merits of cloning and renewable energy, while keeping the convenience store’s shelves stocked.

In our present time, when resources are becoming scarce and conflict between people seems to worsen by the day, it’s difficult not to think ahead to our future. Will we have the necessities to look after our loved ones? What can we do to improve how we treat each other? And if we had the choice, what would we do to better humanity as a whole?

They’re humbling questions, and the upcoming management sim Flat Eye puts them at the forefront, but from the perspective of a gas station manager in a dystopian future.

The game’s main location is the titular Flat Eye, a remote gas station and convenience store owned by the world’s most powerful corporation. The place you’re tasked with running will become the testbed for many of the company’s more advanced pieces of technology, which might lead to drastic consequences for humanity. But that all depends on you.

According to developer Monkey Moon Studio, Flat Eye is a “chill management game” where you run a high-tech gas station that’s almost entirely automated, thanks to an advanced artificial intelligence system that can predict different possible futures. I got to play a short section of the game during GDC 2022 in San Francisco, and it impressed me with its concept and how it blended humor with some strikingly on-point social commentary.

Along with making jokes about working retail, Flat Eye’s AI also has a weird obsession with the 1985 film Clue, adapted from the classic board game. The AI constantly brings up facts about the movie, even during some important conversations, and the many details all tie in to the core storytelling of Flat Eye. There are other details too, important things you soak up while working alone in the convenience store: hidden bits found in your work emails that detail upcoming plans, snippets from one of your many conversations with the self-aware AI. These give the game a surprising amount of humanity, which I found somewhat comforting. 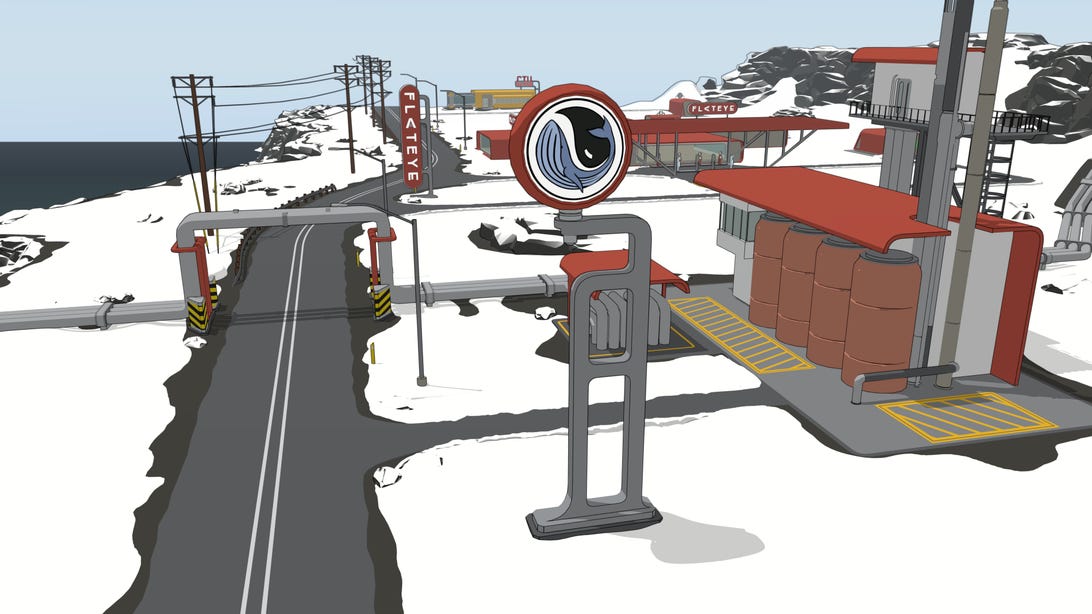 The gas station Flat Eye, in a remote, icy wilderness, is a place where the world’s most advanced technology will be installed.Monkey Moon Studio, Raw Fury

Despite simulating the experiences of retail work and of being in charge of advanced tech, Flat Eye is indeed a “chill management game.” As in The Sims, you’re tasked with looking after the protagonist while taking care of day-to-day errands. Generally, these tasks are handled with a few mouse clicks, as you guide your character around the store. As a manager, you’ll need to ensure the store’s shelves are stocked with snacks, the store’s devices and infrastructure are working fine, and the customers are happy with their junk food and car fuel.

Since it’s just you, you’ll need to hop between different store areas to inspect machines that need repair and to ensure customers are getting helped and that the technology being installed works. These pieces of advanced tech will end up being a big draw for store customers, with things like organ replacement vending machines and gizmos devoted to cloning, teleportation and even life extension.

The store’s AI is there to help, but its primary goal is to run the back end and clue you in to some important choices to come. Every once in a while, premium customers visit the store to take advantage of the experimental technology, and that’s where Flat Eye presents its moral quandaries. In the demo, a premium customer wanted to use one of the store’s machines to extend their life. Before granting the request, you could interact, asking what their intentions are and if the customer really wanted to proceed.

Depending on your choices, the AI shows you visions of the future, revealing what could happen down the line if these premium customers use the tech in a certain way. In the case of the life extender, the device could eventually fall into the hands of the world’s superwealthy, making it inaccessible to everyone in lower social classes. This shift leads to global riots and rampant inequality between those with the means and those without. What started as a seemingly positive contribution to humanity could potentially lead to an incredibly bleak future, and Flat Eye shows the consequences of that in some lurid detail.

I like Flat Eye’s approach to social commentary and “chill management,” because it makes you an active participant in the use of this technology and in the subsequent consequences. You’re just a gas station manager, but you’re expected to work with the world’s most advanced AI and possess the wisdom to know what’s truly best for mankind.

I really dig this concept, and Flat Eye’s early demo shows great promise in exploring it further and potentially seeing the game come to a more hopeful climax. Though Flat Eye takes place in a dystopian future, the game’s main loop is about examining the present and maybe discovering that the future doesn’t have to be so bleak — and that perhaps there’s another way forward for everyone. That’s a powerful message, one I’d like to examine more fully in the complete release.

Flat Eye is scheduled to come to the PC later this year, published by Raw Fury Games